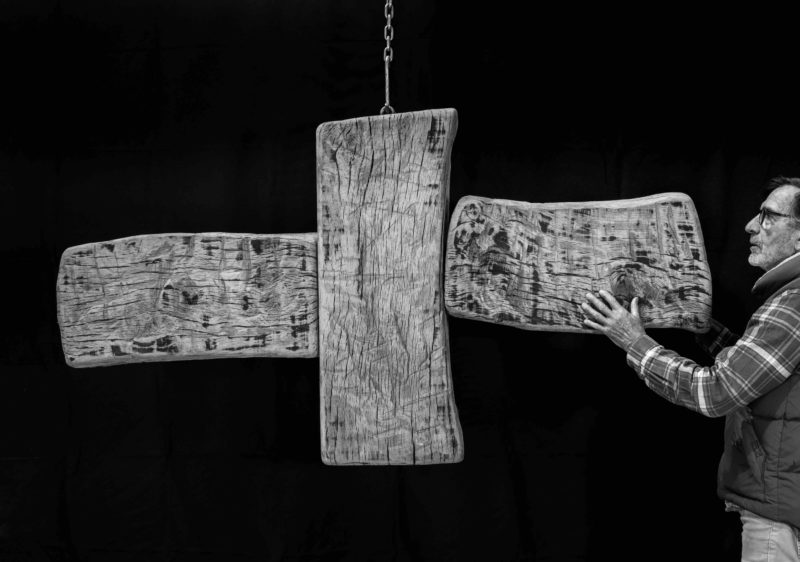 Kepa Akixo was born in 1947 and grew up in a small mountain village in the province of Guipuzcoa, in the Southern Basque Country. Somewhat of a tearaway child and a recalcitrant student, at the age of eleven he joined the Catholic seminary boarding school in Saturraran where he discovered the ocean and biblical texts. Encountering the metaphysics and profundity of both the sea and sacred writings was a decisive factor in Zigor’s development as an autodidact. At the age of 14, he worked as a fitter and turner, and excelled in the sport of Basque pelota. Reflexes conditioned as a labourer and pelotari were to have a significant impact on his artistic kinesics to come, with repeated momentum from the wall to the work.

For several years, from the age of 16, Kepa Akixo became fully committed to political activism in the midst of the Franco dictatorship. In addition to spiritual texts, he wrote of resistance striving for a free Basque Country, both its entity and its language. It was during this period that he adopted his nom de plume Zigor, the Basque word for “whip”, and laid bare the roots of organic poetry in which fragility is revealed at its most robust, whether in nature, form or humankind.

It was at the beginning of the 1970s that Zigor published his first collections of poems in the Basque language and he has been published every year since then in the Basque review Poesiaren hatsa and Maiatz. His poems, a cross between solitary strolls and haïkus, are now translated in French, Spanish and English.

In 1977, he became a photojournalist for major news magazines and the Capa press agency. He travelled the world until 1982, especially in the Sahara desert, and these life experiences chronicled, in his eyes, the shared fabric of land and language. This profound awareness influenced his perspective and his photos, between instinct and epiphany. After his career as a photojournalist, Zigor did not touch his Leica for several years. It was in the 2010s that he felt the need to pick up this contemplative tool once again, but this time with a totally artistic focus. No colours, which he considers to be a distraction. Portraits and landscapes juxtapose Zigor’s photographic work, in which black and white perpetuates the perceived poetic texture.

An appointment with sculpture

It was in 1983, upon being commissioned to take a portrait of the sculptor Remigio Mendiburu that Zigor ventured into his subject’s workshop in Hondarribia. It proved to be a revelation for Zigor, who decided to devote himself to this art whose force and sensual resonance he so keenly felt: an art form embracing thought that is continuously disrupted and continuously renewed. He set up his workshop in Biarritz and his name joined those of great contemporary Basque Country sculptors, such as Nestor Basterretxea, Eduardo Chillida, Jorge Oteiza, where the art of sculpture stands intrinsically linked to the motherland.

Body of work and artistic process

Importance of the sketchbook for Zigor

Sketchbooks open the door to the artist’s imagination and trace the genesis of his work. Sketches, outlines, rough drawings are the murmurings of work in the making, still dewy from the moment it was reaped, like a feeling that is taking shape.[8] A few words, but not yet a sentence, that the exchange with substance will later reveal.

“The sketch is a humble stone pointing the way between thought and hand.”  Zigor, The sketch.

Painting or the extension of a stroke

Painting (watercolour, chalk, oil, gouache, acrylic or walnut ink) is the same process that spills out of the sketchbook to take on all its magnitude, sometimes on canvases measuring 3m50, hoisted like imaginary fronton pelota walls.

“The stroke hits the wall and the poetry can be heard leaving on its way to eternity.” Zigor

Kepa Akixo aka Zigor, is a sculptor, photographer, artist and poet. He was born in 1947 in Aretxabaleta, (a town in the province of Gipuzkoa), in the Southern Basque Country. His poems were published commencing 1973, and he travelled the world as a photojournalist for major news magazines and the Capa press agency until 1982. Then, in 1983, he decided to give full rein to his creativity through sculpture and rapidly joined the ranks of great contemporary Basque sculptors. Zigor draws inspiration from nature, giving new form to its original movement of organized chaos. Sculptures, photographs, paintings and poems reverberate together and convey the archaic, ubiquitous strength of a world and humanity bound together by their roots.

A struggle can be detected between volumes, gravity and space that, by ingenious innate order, end up by merging and falling back into place.  Zigor’s sculptures, witnesses to this “organized chaos”, have no end. The lines seamlessly fuse and each angle of vision portrays a new piece that invites wind, water and light to pass through it.

It is in the infinitely subtle that this tellurian orchestrator of sometimes gigantic constructions draws his source of inspiration. From the drop of water that bends a blade of grass without snapping it to the delicate wings of birds that withstand all the winds that blow.

Dimensions of spirituality and identity subtly occupy Zigor’s work. “I sculpt like I pray”, he says and this state of consciousness, embracing perception of beauty and hard-won freedom, also recounts a captive state of nothingness, convinced that poetry can perceptibly change the world.

“In the shadow of sculptures hides darkness,

And in darkness the shape of mystery,

And in mystery all the shapes.” Zigor, In the shadow of sculptures

From infinitely small to monumental

It was in 1996, after meeting the art dealer Paul Haim, that Zigor began working with bronze, fascinated by the play of light on this material.

“In some sculptures, light penetrates never to emerge. It stays inside as if absorbed by the dark hole of eternity. However, light penetrates other sculptures and, without traversing them, reappears transformed. And in some, light gushes out of the other side like water from a mountain.” Zigor

Zigor’s monumental sculptures are represented in numerous collections in the Basque Country, Spain, Australia (Sydney), the United States (Washington and New York), Switzerland and Argentina.[11] They stand in private gardens and public spaces, like the Urkulu fountain in Biarritz, witness to a rock’s melancholy on seeing the wave recede.[12]

“The sculpture is not the structure in bronze but rather the water that sings inside it.” Zigor, Urkulu.

And so Zigor creates a totemic work, an entire Basque Country in his imagination.

“The landscape that surrounds me has always moved me and accompanied me in my deeper understanding of the world. When I sculpt, paint, take photographs and write, I’m just trying to recount this feeling. In the creative act, my little sketchbooks are very often the source of most of my works. But the pieces themselves follow very mysterious paths connected not only to the medium and tool used but also my doubts and my courage. Especially courage, which is necessary in order to continue along the path dictated by what appears in front of me. Honouring mishaps is the cornerstone of the creative act. What a mistake it would be to believe that I could improve or solve the unsolvable. I don’t know what the sculptures and paintings will be. It’s only a perpetual attempt to keep alive the inspiration that galvanized me at the start.”